Those of you who attended OMFW 2013 received a talk on Windows 8 and Server 2012 memory forensics with Volatility. One of the interesting aspects of this new operating system, which includes 8.1 and 2012 R2, is that the kernel debugger data block (_KDDEBUGGER_DATA64) is encoded by default on the 64-bit versions. As noted in Takahiro Haruyama's blog, this capability has been present since Vista, but only enabled in certain situations. Whether you're dealing with one of those special circumstances from a Vista/2008/7 system, or if you're analyzing memory from a more recent Windows 8 or 2012 system, the question remains -- what can you do about it?

An encoded KDBG can have a hugely negative effect on your ability to perform memory forensics. This structure contains a lot of critical details about the system, including the pointers to the start of the lists of active processes and loaded kernel modules, the address of the PspCid handle table, the ranges for the paged and non-paged pools, etc. If all of these fields are encoded, your day becomes that much more difficult.

As Takahiro points out, acquiring memory in crash dump format may help you evade this problem altogether, because some APIs used to create crash dumps will automatically decode the data before writing it to the crash dump file. They do this so Microsoft's debugger (Windbg) can find and read the structure when necessary. In fact, by simply attaching a kernel debugger to a target system, the KDBG structure will be decoded. However, tools that acquire memory in raw format (with no headers, no meta-data, etc.) will not preemptively decode the data, and raw memory dumps, including virtual machine snapshot memory files, are by far the most common format -- since practically all analysis tools accept them as input.

The answer to the problem lies within the NT kernel module, specifically in a function named KdCopyDataBlock. Here you will find a few variables, such as KiWaitNever and KiWaitAlways which are set based on the value of the timestamp counter (RDTSC) when the system boots (these values are also involved in pointer obfuscation for Patchguard2). Using those values in combination with a small formula, which we tweeted back in July 2013, you can fully decode the KDBG structure in raw memory dumps and access its members per the usual. 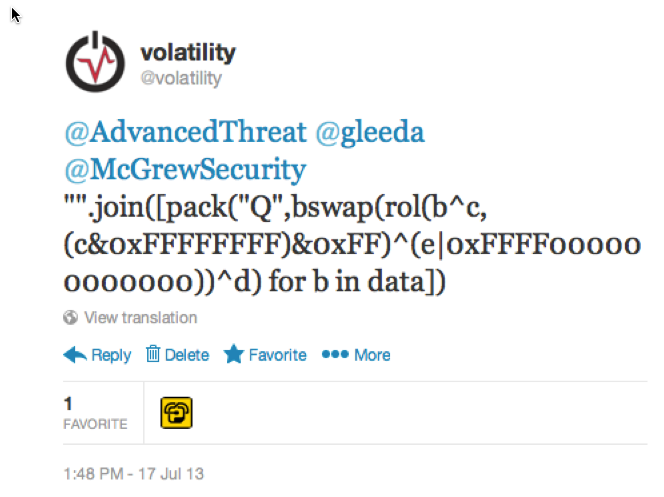 When you execute Volatility against a raw memory dump (or any memory dump format for that matter) that contains an encoded KDBG structure, it will first find the KiWaitNever, KiWaitAlways, and few other required sources of entropy. Then it will find the KDBG structure, despite the fact that its encoded, and use the previously found values to decode it. The plain-text data is stored in the memory of the Volatility process, not written back to your memory dump file. As a result, from the end-user's perspective, nothing has really changed. You go about your analysis in the same way you always do: 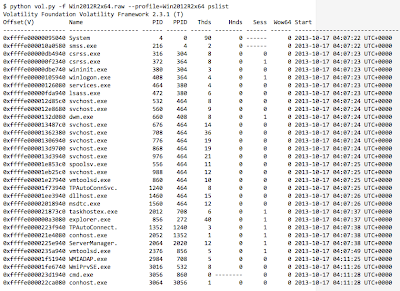 The build of Volatility that supports 32- and 64-bit Windows 8, 8.1, 2012, and 2012 R2 is currently being beta-tested by students who participate in our training classes, as well as by a few select members of the community. We hope you're as excited about this new capability as we are!
Posted by Michael Hale Ligh at 2:17 PM